I have just moved into a new apartment. Its a fantastic place and I hope I can do some good work here for my last year of studying. With a child’s eagerness, I began looking into broadband providers before I moved in, hoping to get the installation done early. To my surprise and dismay, it turns out that this apartment (and the rest of the street it seems) is connected to the Rose Street exchange. This exchange is perhaps the only one in all of Edinburgh that has no fibre (FTTC) connectivity at all, and won’t for a while. 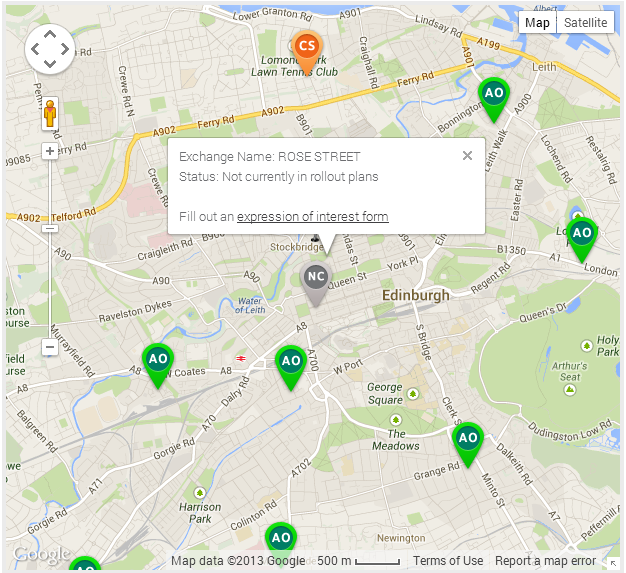 My previous apartment was located in close vicinity to the Waverley exchange, which has fibre connectivity; I was enjoying a comfortable speed of 36 Mbits down and 3 Mbits up. Here however, I was told by OpenReach that my maximum speed would be 9 Mbits down and 1 Mbit up. This was not acceptable to me. So I took the advice of two friends and called up Virgin Media (VM).

I was handed over to a nice lady, and we talked through what could be offered. I expressed my interest in wanting the Student deal (contract of 9 months instead of the usual 12 or 18) and that I wanted 60 XL package (60 Mbits down) with no phone line. I don’t feel like paying £15 a month for having a phone line that I rarely use.

She said it was all possible. Furthermore, after talking with the landlord, it turns out that there is already a cable connection in the the flat, so the engineer won’t have to drill holes into the walls.

When the engineer arrived, we got into talking about the stability of VM’s lines here in the area and the process the engineer would have to go through to actually get me connected. The connection here, by all accounts, seems to be very good indeed, as there is an exchange here in the building itself, with fibre connectivity from there to VM’s hub. As mentioned before, there already was a cable connection here in the flat, however what I didn’t know was that it was not connected to the exchange here in the building. The engineer needed to pass some cable from practically my front door to the basement where the exchange is in order to get me connected.

After about an hour, the engineer came back into the flat with VM’s new Super Hub 2 router/modem. After about 10 minutes, I was connected! We both then quickly jumped over to my desk to try out the connection. Have a look at my speedtest.net result:

As can be seen, the connection is really very fast, but more so than that is the fact that it is incredible stable, better than my fibre connection from Sky.

With that successfully completed, the engineer left going to another customer.

So far I am really happy with the setup, but I’ll be testing it out in full over the next few days (or weeks) and see how good it really is. Initially though, I still need to get use to the throttle limits set during most of the day.